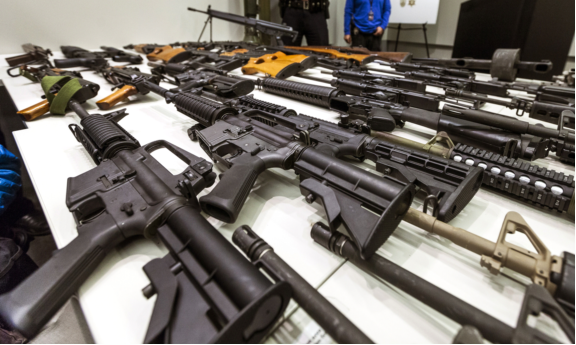 Gov. has signed new gun control legislation for California, enacting bills that limit magazine capacity to 10 bullets; require a background check for those purchasing ammunition; and restrict the lending of firearms, among other effects.

In signing the bills, he wants “to enhance public safety by tightening our existing laws in a responsible and focused manner, while protecting the rights of law-abiding gun owners.”

Two of the bills close the “bullet button loophole,” as member station reports:

1.”The loophole refers to the sale of ‘California legal’ firearms that don’t fall under California’s ban of guns with detachable magazines.

2.”To get around the law, manufacturers created versions of firearms that feature a button that can be pushed with a small tool — for instance the tip of a bullet — to release an empty magazine and insert a new one.”

Another bill that will now become law tries to limit “straw purchasing,” the practice of a person buying a gun legally with the intent of giving or selling the weapon to someone else. In addition to making it a misdemeanor to file a false report about a gun being lost or stolen, the new law will prohibit the purchaser from buying another gun for 10 years.

As station reminds us, the classification of a gun as an “assault weapon” is a legal designation in California:

“Legislators established the ‘assault weapon’ as a new classification of firearm in 1989. Following a court challenge in 2000, the law was upheld. Gun owners could keep their assault weapons provided they registered with the state before Jan. 23, 2001.”

The legislation was signed almost exactly seven months after husband-and-wife shooters killed 14 people at the Inland Regional Center in San Bernardino. In April, a relative of the murderers was charged with providing the guns they used.

All of the bills he signed were sponsored and so were the five bills that he vetoed, although one of those, which makes it a felony to steal a gun, was also sponsored by Republican Assemblywoman.
In rejecting that bill, he said a similar measure is already slated to appear as a state ballot issue in November.

He vetoed another bill that would make it a misdemeanor not to report the loss or theft of a gun, saying he doesn’t believe the measure would help stop gun traffickers. He added that the bill wouldn’t make irresponsible people become responsible.

Another bill that sought to classify the body of a firearm as a firearm, thus closing a loophole that has allowed unfinished gun frames or receivers to be sold under less scrutiny than a finished gun would require, was deemed to have wording that was too vague.

I was talking with some relatives the other day and mentioned that it feels like we’re living in a crazy movie with all that is happening in our...