Home / All Posts / Uncategorized / Despite being a no-gun zone, guns used on... 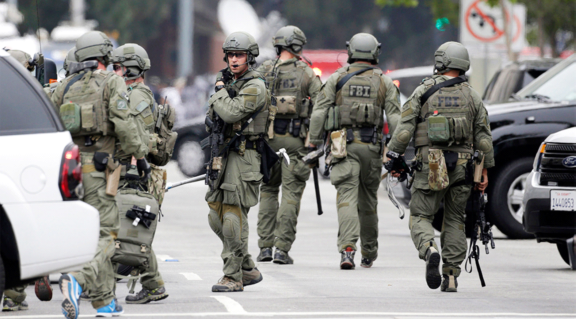 It seems that people occasionally ignore those cute little signs of a gun with a slash through it indicating the area is supposedly a gun-free zone and bring in guns. This happens especially when there are no valiant TSA guards with X-ray machines guaranteeing their absence. Yeah, I was surprised, too.
And that’s what happened on Wednesday. Guns are not allowed on California’s school campuses by law.

PURPOSE AND SCOPE The California Gun-Free School Zone Act of 1995 and Amendments, codified in California Penal Codes §§ 626.9 & 626.10, prohibit the transportation and possession of firearms and other dangerous weapons on public school properties in California, including property of the University of California.

This Policy applies to all students, employees, and other members of the University community, to any vendor or contractor providing services on University Property, and to any individual visiting the University or participating in or attending University programs or activities. And just last September, the California state legislature expanded the no guns in school law.

The anti-gun bill, passed by the Legislature on Sept. 2, would expand criminal liability under the Gun-Free School Zone Act to handgun carry license (“CCW”) holders and prohibit carry of firearms for self-defense on California school grounds. It would also criminalize the mere possession of ammunition on the grounds of any school or college campus, even for trained gun owners who have a license to carry issued by their police chief or county sheriff. And if Senate Bill 347 becomes law, possession of ammunition on school grounds would also result in a 10-year total gun ban.

But someone ignored the no gun stickers and the state’s and the school’s sensible legal policy on guns and brought one to school despite the law and was involved in what police are calling a murder-suicide. Yeah, I was surprised, too.

The school’s armed police force and the Los Angeles Police Department arrived after receiving calls about gunfire. But now a young professor is dead, as is the shooter.

It seems that the sensible gun laws didn’t save the professor and didn’t prevent the shooter from bringing a gun to campus for his evil action.

In many disciplines, there is a wealth of primary evaluation research on what works, and systematic reviews that synthesize that evidence. This...